by Anthony on May 23, 2015
Classes
3400
7
previous article
KatoZee's Hunter Rooter (^^,)
next article
The PvE Guardian Fighter for XBOX ONE

If you wish to see this build at work before building  this is a 1 min PVP  example.

*note* My gear score is only 10.6k so the worth of this build is only going to rise.

First off this is definitely one of the harder classes to build sense there are no real current build guides and a lot of powers become worthless in PVP.  Example:  ‘Front line Surge’ will not knock down enemies in PVP making it pretty much worthless. Some like it, I don’t. I’ve respec’d about 6 times making this do what I want and be worth actually playing this Character.

2 hits pretty much kill any enemy

Attacks are combos so you can only use Encounters to attack every 13 seconds.

If there are 2 ‘Hunter Rangers’ and they both spam  ‘Fox’s Cunning’  (lvled all the way up, lets every close member on their team 100% dodge chance) makes your combo almost worthless, but its rare to find that, but heads up. Most don’t use it.  If they do use it use 2 basic attacks first and then use combo.

Pay attention no one is coming to block you or slow you down you can destroy any one trying to 1v1 you even TRs but main focus is (3). If enemy is coming wait till they hit a blind spot and you jump off and go quick route.

When on (3) Shield and get ready to Attack whoever is doing the most dmg to you unless there is a cleric. Cleric is always number 1 on hit list.

If you go 2 you aim for whoever is doing the most annoyance to team whether dmg/ or enemy healer.

Don’t enchant Crit chance! It is already very low and pretty worthless and with this build as you already do high enough damage to kill anyone it’s just overkill.  The most I’ve seen in other GF’s is about 20%, which is poop.

Do spec for power with enchantments and gear.  I also use in utility: movement, prob change to life steal maybe.

Ability Scores:  Ap Gain is worthless with this character the ‘Dailys’ are absolutely worthless in PVP, though some are less worthless.

Build up:  Str and Dex   *both secondary  ;  forget Con: ap is worthless and Max hp is good enough.

Terrifying Impact: I can’t use this at all. such a little line ahead and I miss or they move about 100% of the time. Maybe just me.

Supremacy of steel:  Would only be worth it if you were immune to all damage for that brief moment it is activated, and then deal out what you would have taken.                    * This power does and doesn’t make sense. Your character can take alot of damage, somewhat, but any build or use of the shield is made to reduce that damage. So IDK.  I’ll fiddle with some more, but I don’t use.

Enduring Warrior: What is this? PVP or PVE probably the worst skill in the game.

Ironvanguard:  this is the build for iron vanguard, there is a sword master build floating out there that’s awesome but I’m not paying more money to respec to figure it out.

Knights Challenge: only 1 point is necessary any more and it could be harmful.

On PVE I usually run: run with PVP gear full because of speed bonus. ads are nothing to train. mark as you run. 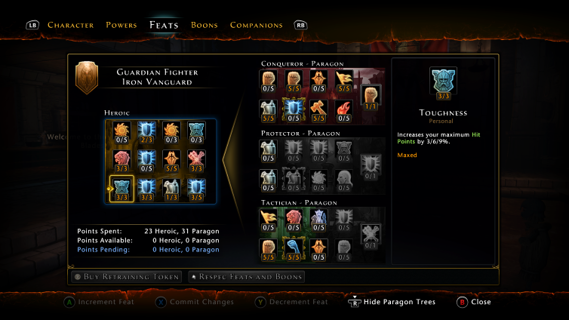 If you read each carefully it builds you up for a ult combo attack.

How to attack: Get used to marking enemies, for some reason this was difficult to me, but if you want to be awesome get that down.

1. Single out target:  astral shields are silly now but catch enemy at edge if he is in it and you can cc them outside the radius.

3. Knights challenge on same enemy: must

4. Bull Charge:  is at 1 point because if maxed out it knocks them further away making Anvil of Doom harder to land. (Because they have more time to get out of cc)

5. Anvil of doom: while enemy is prone is a must. *Read Feats

6. if they’re not dead after combo spam  Threatening rush.      This is your run/roll cause you are slow, and this will allow you to catch the speedy enemies.

Now your  GF doesn’t suck.    Sticking with a Cleric teammate makes you invincible more or less, so if you have one follow him and protect him.

by Xselli on February 28, 2020
Neverwinter | Modul 18 | Rogue Guide | English (PC/XBOX/PS4) Here for you my Rogue guide from Youtube to watch.   If you want to see more you can join me on my discord https://discord.gg/y2acUsB

by Enyo on February 2, 2020
An in-depth guide to help players build and understand their Rogues throughout the game. If you’re looking for a guild and/or are new to the game, I run a large and interactive guild on PC called Chronic Legion. All are welcome to join! Click here for more information.
Ads

by Sorek on December 19, 2019
TL;DR The Stance Switching Warden and Hunter Trapper are pretty decent builds that I tested in all the content up to and including LOMM, very flexible, fun, and only very slightly behind Melee Warden in terms of dps. Hunter Ranged is fun to play, but is slightly behind the previous two builds. However, I thought […]
comments
Leave a reply

This site uses Akismet to reduce spam. Learn how your comment data is processed.